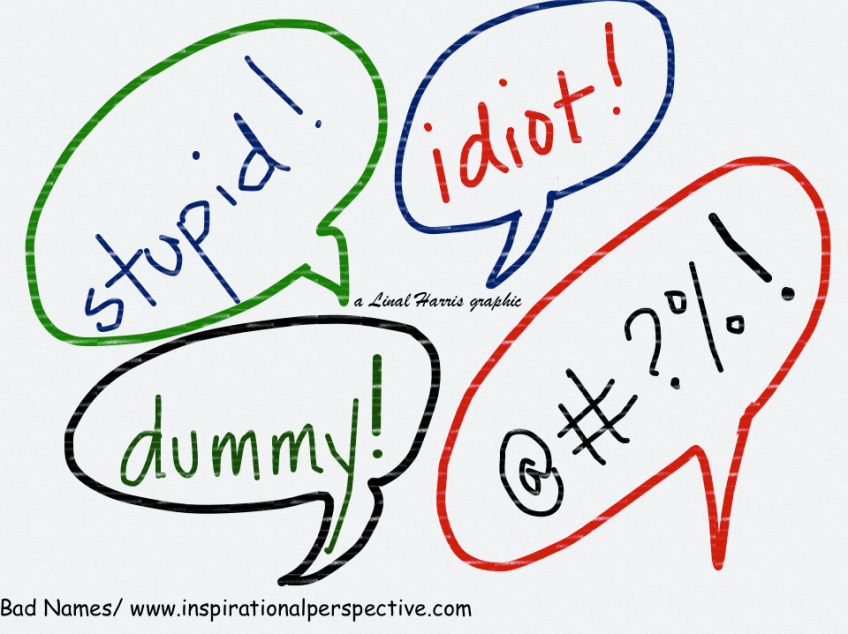 When was the last time someone called you a really bad name?

Back in the ‘80‘s when I was growing up there was a coined phrase that mom’s told their children to quote if someone called them out of their name.

“Sticks and stones may break my bones…but words will never hurt me!”

Did you remember the last person who called you that name yet?
Oh…and did you include yourself in the lineup?
Now can you remember?

All to often I hear friends and colleagues label themselves an idiot, a dummy or even call themselves stupid after misspeaking or making a mistake.
(Please note: This is the PG version)

Have you been guilty of this type of self defamation?
If not…great! Don’t start!
If you are guilty…I want to present the argument for why you should stop.

Argument #1
As children we began to effectively communicate about twenty-four to thirty-six months after birth.  From that point until about thirteen to fifteen we were terribly offended if someone called us out of our names.  So much so, we would report such behavior to a parent or teacher if they were available.  Why?  Well…because it hurt!

Then something strange happens.  We got so used to defending ourselves from name callers we just started beating them to the punch as teenagers.  If we made a mistake, we’d quickly roll our eyes and announce, “Ugh…I know…I’m stupid…I’m an idiot!”

No!  It’s not true.  How about you are just human…and humans make mistakes.  We’re not stupid if we learn from these mistakes.
(If you don’t learn…well…that’s another topic…lol)

Argument #2
Words do hurt!  They hurt more than we can imagine.  In the book, “The Four Agreements” Don Miguel Ruiz proclaims that the first of the four agreements is the most important, which is ‘Be Impeccable With Your Word’.  To keep this agreement one must do the following:

Speak with integrity.  Say only what you mean.  Avoid using the word to speak against yourself or to gossip about others.  Use the power of your word in the direction of truth and love.

Key phrase: Avoid using the word to speak against yourself…
(…and you still shouldn’t gossip about others)

Argument #3
To complete this argument I must ask you to induce your deductive reasoning skills.

2+2=4
Always has…
This is a proven truth in mathematics.

Self affirmation and self defamation also have consequential outcomes.  Although the outcomes don’t feel as tangible as 2+2, they produce a result that is very real.

If these three arguments still haven’t swayed you, here is my final attempt.  Imagine in your mind someone who you love very much…
Can you see their face?

Would you talk to them the way you talk to yourself?
If the answer is no…then you have some work to do.